Now workers can use the Tablet Timeclock App even when it isn't connected to the internet!

Written by Aimee Bridges
Updated over a week ago

Now workers can use the tablet timeclock app while your tablet is offline. As long as a tablet timeclock manager signs in to the app while it is connected to the internet, workers can clock in and out as well as add breaks and tips even if the app loses connection. Once the device connects to the internet again, the data that was collected will sync to the web app and appear on the Time & Attendance page.

This feature is available on Version 1.6 or later of the Nowsta Timeclock App. Users should download the most recent version for full functionality.

Offline mode will be enabled my default, so you won't need to adjust any settings.

Be sure to connect the device to the internet as frequently as possible because data can only be stored for one day at a time. If you collect time entries for two days in a row in offline mode, only those collected on the second day will sync when you connect to internet.

Even though offline mode is supported, it is important to keep the app online as much as possible because if there are changes made in the web app the tablet timeclock app won’t have access to that information until it syncs.

Nowsta is frequently pulling worker names, phone numbers, access codes, and punch in and punch out data (including breaks) so that if your device goes offline the information in the timeclock app is as accurate as possible.

If you sign in to the tablet timeclock app and you aren't connected to the internet, a banner will appear. You will be reminded to connect to the internet to submit the data collected while offline, but workers won't be prevented from taking any further actions and are free to use the app. 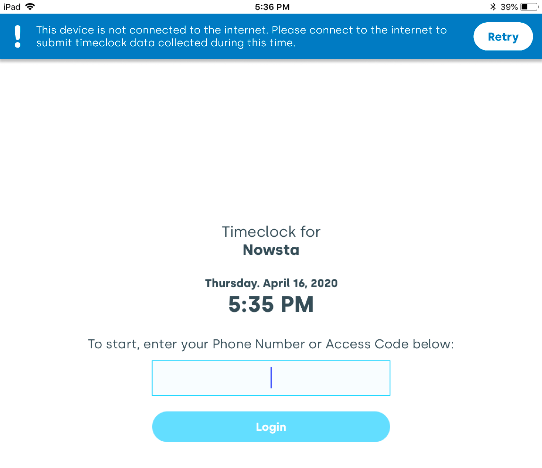 When the tablet comes back online and the app is open, all the data you've collected will sync up with web app. Pictures, time card information, and tips recorded offline will all be saved and display in the Time & Attendance Page. 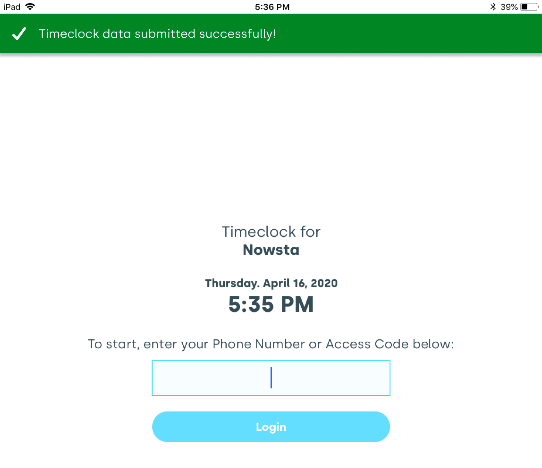 Once the sync is finished, a banner will display letting you know that the data was submitted successfully.

Did this answer your question?